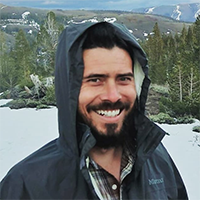 Congratulations to our graduate student Blake for being awarded the David C Williams Fellowship and for developing an interdisciplinary online introduction to R Course!

The David C. Williams Memorial Fellowship was established by David’s wife, Dr. Kathleen B. Hom. David Charles Williams (1937-2002) was one of the first consultants to address the concerns of communities facing rapid growth due to energy projects. In 1981, he was confirmed by the U.S. Senate as a member of the Senior Executive Service; he joined the Bureau of Land Management, Department of the Interior. In 1991, he became Chief of Planning for BLM, and in 1992, for the State Department, coordinated the American contingent to the United Nations Conference on Environment and Development in Brazil. David was responsible for the land use planning of all federal lands managed by the agency. During this period he earned his MPA from the University of Southern California, and began work on his doctorate. David believed that responsible stewardship of public lands required the informed participation of citizens as well as public and private agencies. To this end, he moved to Utah to complete his dissertation and to teach at the University of Utah in Salt Lake City. David was the first Stegner Fellow in the School of Law, where he created a course on Protected Lands; he also taught Administrative Theory for Public Administration.